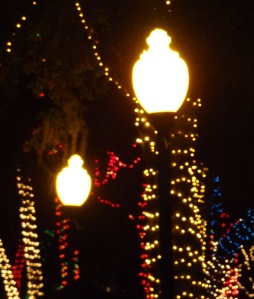 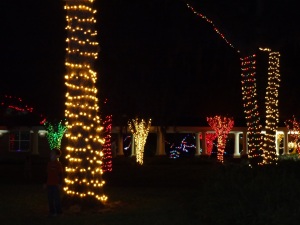 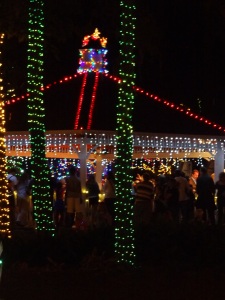 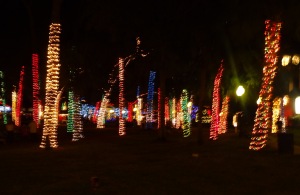 Our little burg north of Orlando has a beautiful holiday lighting tradition.  City Hall is nestled in a copse of live oaks, palm trees and Crepe Myrtles that get wrapped with Christmas lights every year.  It’s a glorious scene, and opening night was this past Friday.  Intended for families that want to experience the magic and beauty of this Holiday season by creating memories with their children that will follow them into adulthood, we took the bait!  Having gone to walk the park and look at the lights the past couple years, we decided to go down to the opening night festivities with a couple of friends that weren’t scared off by the prospect of two rambunctious little boys who would take the serenity out of their evening stroll.

Not thinking about anything other than making sure that the boys would be warm enough as the evening progressed, I dressed them in sweaters and jeans.  Pierce was stylish and invisible in all navy blue.  Not good amidst the chaos of throngs of people and cars.  Add to this fantastic formula for ending up on a milk carton, the horrible phase of being three and thinking he is old enough to make his own decisions—PLUS feigning swift and sudden hearing loss when his name was called.  I know Christmas is for children, but probably not mine.  I sure get sick of them ruining it for ME!

Then there is Mikey…asking five hundred sixty-seven thousand two hundred and ninety-two questions a minute all the while spinning like a top and bouncing off the trees.  At least we didn’t have to worry he would stray too far, where as I would turn around to find Pierce rolling down any grassy knoll with a decent slope regardless of whose way he was in.  It was like taking out crazy people out of the asylum for the day and not realizing what we were in for!  Surely when we returned them we would be checking ourselves in, too.

To get to this event we parked across the street at Mikey’s school and crossed over on the pedestrian bridge.  There was another couple—grandparent-ly—that was walking in front of us.  The boys kept getting too far ahead, ramping up the chaos, and making me feel like the people in front of us wanted to strangle these wild children for rushing their pace.  When we got to the park, the boys ran off in the grass and the elderly gentleman turned and said “Looks like you lost a couple!”  I told him that was the plan, and then he pulls a brand new toy out of a bag he was carrying and gave it to us to bring to the donation table and get cookies in return.  How sweet was that?  We didn’t even know that they were taking donations, and after being stalked by my children, this stranger offers us one of his donations so that my children can get cookies.  It’s crazy—that kind of stuff seems to happen to us all the time—random acts of kindness.

Anyway, back to the chaos.  Santa arrived with Mrs. Claus on a fire engine to take pictures with anyone who wanted to stand in line until the next morning.  This is why we do these things before Thanksgiving!  It was pretty lame, too since they couldn’t even find a guy who already looked like Santa.  My friend’s boyfriend said “What’d they do?  Hire one of the staff janitors to put on a beard?”  That’s about how it looked.

To escape the mob, we walked the perimeter of the park and looked at all the lights.  At one point in my constant attempt to locate Pierce, I saw him stomping through vine-y ground cover.  My first thought was how many roaches are scrambling around under his feet, and then my second thought was: “That’s pretty ill-mannered to be running through the landscape beds.”  Once again, and not for the last time that evening I tried to control my child.  After about 30 minutes it was decided that we needed to get far, far away from that place and not return again on opening night.  We went to dinner, and the boys were pretty darn good there!

Yesterday we took them to the zoo.  This is one of our favorite places, and aside from the five million questions and non-stop chatter, it was quite fun.  I’ll let the picture’s tell the story. 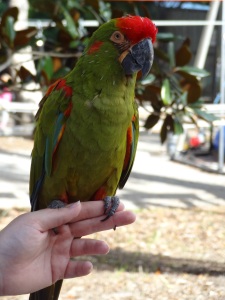 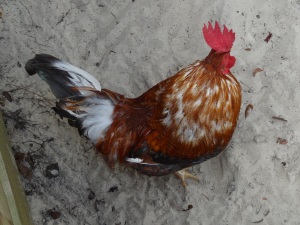 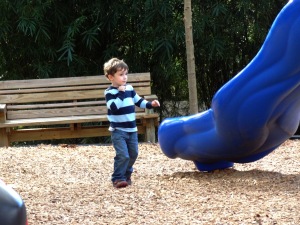 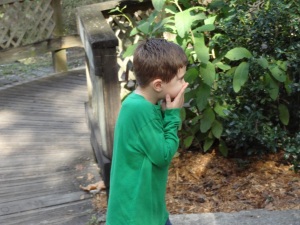 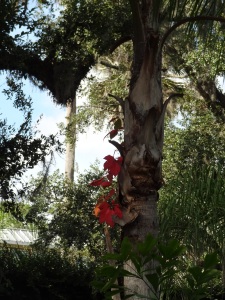 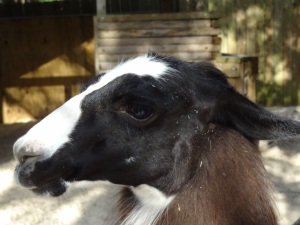 All of my crazy hard work!